With 60 to 70%, Alzheimer's disease is the most frequent cause of dementia in old age. Its prevalence doubles about every five years from the age of 65. 30% of over 90 year-olds suffer from this disease. Alzheimer's disease is a progressive and irreversible deterioration of cognitive abilities. The disease course is divided into three consecutive phases, which are the preclinical stage, the MCI (mild cognitive impairment) stage and dementia. In patients with Alzheimer's disease, proteins are accumulated in the brain, which is associated with the destruction of nerve cells.

Within the nerve cells (particularly in the cortical and limbic brain regions) accumulation of neurofibrillary tangles from hyperphosphorylated tau protein (pTau(181)) occurs. Tau is expressed in neurons, where it stabilises the microtubuli of the cytoskeleton. Incorrect phosphorylation of this protein leads to aggregation in the form of neurofibrils, which accumulate in the nerve cell bodies and interfere with the axonal transport.

Outside of the nerve cells, accumulation of senile plaques is observed, which mainly consist of beta-amyloids (Aβ). These are peptides that are produced by processing of the membrane-bound amyloid precursor protein (APP) and exist in various isoforms. In Alzheimer's disease the breakdown of these peptides is impaired, which leads to deposits of especially beta-amyloid (1-40) (Aβ1-40) and beta-amyloid (1-42) (Aβ1-42) in the form of plaques. 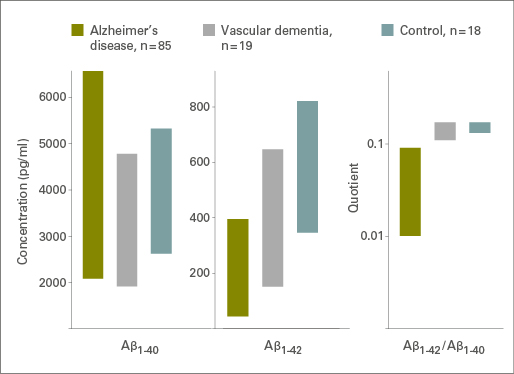 Definitive diagnosis of Alzheimer's disease is only possible post-mortem by means of histological examination of a brain tissue sample (detection of plaques and neurofibrillary tangles). The diagnosis of probable Alzheimer's disease can be made in the lifetime of a patient based on the clinical presence of dementia syndrome and the exclusion of possible reversible causes. Further information can be obtained by positron emission tomography (PET), which can now be used to visualise the specific neuropathological changes in living patients. Moreover, the determination of biomarkers in cerebrospinal fluid (CSF) has become established in Alzheimer's diagnostics. They are also able to indicate the disease with high reliability.

The CSF of patients who will develop Alzheimer's disease show significantly decreased concentrations of Aβ1-42as early as 5 to 10 years before the onset of cognitive changes. The concentrations of total tau and pTau(181), however, increase with progressing neurodegeneration and cognitive impairment. The amyloid quotient Aβ1-42/Aβ1-40 can be useful in the differentiation of Alzheimer's disease from vascular dementia (see figure). Calculation of this quotient also reduces the distorting influences of preclinical factors on the measured concentrations.

The results obtained with CSF-based neurochemical analyses should always be assessed in the context of all available diagnostic information. 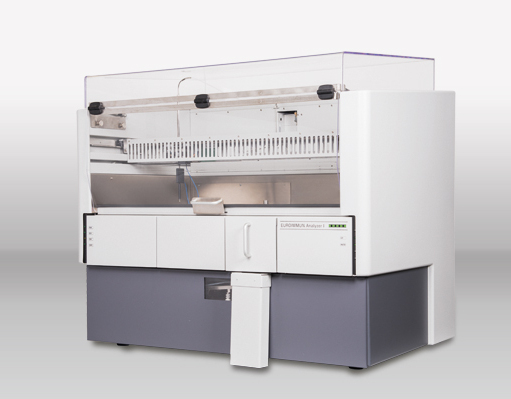